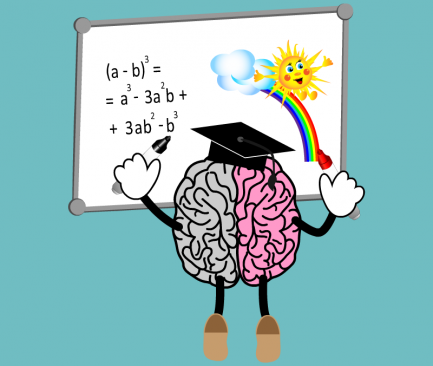 The human brain contains about 100 billion neurons and 100 trillion connections. It is made up of two hemispheres. These two halves, the left brain and the right brain, control different aspects of our personality, mode of thinking, and way of expression. Take a few seconds to try this activity. Lock the fingers of both your hands in a wristlock grip. Which thumb is on the top? If it’s the left thumb, it’s an indication you might be right-brained. But, you might not be convinced because you are right-handed. Try another one, this time fold your arms across your chest. Which hand sits on top? Is it the right or left?

The theory that people are either left-brained or right-brained, first came to light in the 1960s, thanks to the research of Nobel Prize winner Roger W. Sperry. Since then, new research has shown that the two sides of the brain collaborate when performing tasks. Although this theory is outdated, an understanding of the underlying theory helps us understand that people have different preferences based on their brain dominance.

THE TWO SIDES OF OUR BRAIN ARE CROSS-WIRED?

WHICH SIDE DOES WHAT?

The dominant side of our brains affects our thinking style and language. Being more organized and systematic is attributed to left-brain function, whereas, creative and intuitive people are right-brained. The left brain is good for vocabulary, grammar, and literal meanings. The right side is great for the intonation and accentuation of speech. The left brain focusses on words and details, in other words, it thinks in a verbal way. The right brain thinks in pictures instead of words. Most people are not likely to be strictly left-brained or right-brained. We use each side of our brain depending on the task we’re dealing with. In solving a mathematical problem, we use the left hemisphere as the left side is better at logic and analysis. When playing a musical instrument, the right brain focusses on the melody while the left brain focusses on the hand coordination needed to play the instrument.

Most people are more or less equal on both sides of the brain. Being labelled left-brained or right-brained is not important because both hemispheres function together. We can be both creative and logical by activating both hemispheres. The best way to increase your brain potential is not to focus on a single side, but to focus on the link between them. Learn more about the brain from our module.
CATEGORY: blog, Science
TAGS: brain, brain potential, left-brained, left-handed, right-brained, right-handed